We are all excited about the upcoming Tears for Fears 2012 Tour. It was unexpected as so many of us were under the impression another album would be made before the dynamic duo (Roland O. & Curt S.) + team (Jamie W. , Charlton P., Doug P., Michael Wainwright, Afton H. & crew) would head back out on the road. In fact, many of us were prepared to travel in 2013…not right now! But alas, when fan duty calls we get on the ball!!
VIP wishes
Let’s cut to the chase, we want VIP options. We want to be as close to the action as is safe and possible. No, we may not be able to sit on stage at the OC Fair show, we may not even be able to form a chorus and clap section on the side of the stage in Vegas but we want to see sweat, we want to get hit with skittles, we want to be with the band more or less…and many are willing to pay a premium price to do so.

Curt Smith already has an established site where one can subscribe FOR FREE and get the very first updates on what is going on in his world. I’ve benefit from those by purchasing VIP packages that allowed us 1st and 2nd row for solo shows. He even bought dinner for us at the Whitefire Theatre shows.
Preferred Method of VIP:
1. We pay Curt in advance (or whomever is delegated in charge), first come first serve by the timing on the receipt or email.
2. Each fan is only allowed to purchase 3 VIP tickets apiece
3. Our names are added to a list.
4. We arrive at the venue, check in and are seated in the first 5 rows. As in a restaurant, all parties within that 3 ticket purchase must be present or that next VIP seat is given to the next VIP member. Seats start at front row center and branch out on each side. If it is general admission, we are allowed to go in first much like we saw a certain TFF crew member lead some people into the venue at the Wiltern.
*If needed two or more of us will fly out in advance to help orchestrate this. We are not asking for payment, it is a volunteer task. Maybe after the show we can take a picture with Roland and Curt or something…but we’re not asking for compensation…just the chance to make sure our fellow SUPER fans get up front. As we have discussed many times, there is nothing worse than seeing some random person that “just” found out TFF produced a new album in 2004-2005 and can’t even sing half the words to any song let alone the lyrics to ELAHE…while 15 rows back are the superfans who can barely see over the heads of these “fair-weather fans.” Not cool! Not Cool At All! 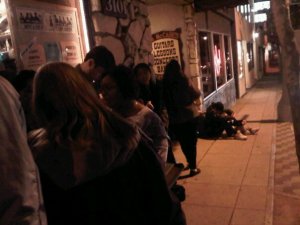 This prevents fans (many of which are self-proclaiming that they are up in age and getting tired) from having to line up at the crack of dawn at a venue in hopes of seeing these precious band members we tweet, FB, etc 365 days a year. It also prevents the very unfair fiasco that occurred in Los Angeles just before The Wiltern 17 September show (and ohhh yes, we are going to discuss that situation at length) where ??Wiltern staff?? offered VIP at 530pm which disrupted the line of superfans already in place and turned into a very big complicated uncomfortable situation for many involved. While we are very happy that security listened to superfan Penelope when she said “we had a line formed already, please respect that”…it was indeed a very uncomfortable situation for quite a very long time. Still not sure why they thought so many people could fit in that tiny room…and one bar tender…really? for 100+ who decided to just go ahead and buy the VIP…I digress.
Sure, we will get there early, I just think we shouldn’t feel if we don’t line up 9 hours in advance we may end up in the 15th row…considering so many of us fly in from all over the globe to see this band on these rare occasions.

Various superfans also looked at a number of other bands and how they form their VIP teams.
At the top of that list were:
Duran Duran
Madonna
The B52s
New Kids on the Block
Duran Duran seems to have a subscription based fan club where fans pay $35-$65 to get passcodes which allow them the option to buy premium seats through the Duran Duran site?  Then the rest are released to the general public the following day? If you are not a subscription based fan you can’t get those really good first few row seats…not even from the box office it seems. Which is only fair. It seems you have to go through the band’s page, log in and get your tickets? Duranies, correct me if I’m wrong. It is hard to understand the process if one is not a part of it completely. I’ve always listened to their music but only recently bought a subscription. It seems the ticket link actually links to the box office and you get first dibs on some really hot coveted seats. I saw those seats in Atlanta and man they were freakin’ awesome!
Madonna seems to have the same sort of set up. You subscribe to the fan club/pay a fan club fee (annual) and you get updates on when tickets go on sale and can use your passcode or something to that nature to get your premium seats? Non-subscribers can’t get those premium seats…which again is only fair.
The B52s announce the pre-sale password on their facebook page and you can go in and get tickets. Many fans do not like this method because it does not provide intimacy. Not every Tom, Dick and Harry should get to see that passcode because they happen to “like” the B52s page and it showed up in their newstream so now they are going to go buy 90 tickets and sell them to desperate superfans. I suspect that they sent it to their mailing list first because the Atlanta pit seats were gone by 11am the day the passcode was announced. Either way, at least they did something for people who want pre-sale tickets. I’m “satisfied” with my 3rd row orchestra though I’d have loved access to the pit seats so I could dance around with the hardcore fans.
New Kids on the Block held a sort of townhall. You can read about it on @MomCycFan’s Blog. This is a great alternative to the meet&greet. Those who subscribed to the fan site (it’s pay per user site) got an invitation to meet the band for free and bring one friend. I think this would be lovely for future meet-ups. It is very similar to what we’ve been discussing via various social media pages already.

Given that we are very afraid Tears for Fears won’t be releasing another album (as we understand that the band is busy, have big families now and other responsibilities and interests) we are trying to make the most of what we fear may be the last of “Tears.” We superfans are willing to give a bit more to be on a list that guarantees we are not standing 19 rows back… even 6th row is not acceptable. We want to be upfront. We want to sing-a-long (not loudly, by the way, I was not screaming, but lipsyncing at the Wiltern cause I had no voice left at this point of the tour, hence why I was screeching by the time Roland handed me the microphone) sway and get showered with Curt’s candy and see Roland toss his hair back… We like to watch Michael smile at us squirming in our seats and wave at people in the audience…that means alot to us.

We slave all day in the real world, this is our release, our moment of absolute happiness. So many of us love and appreciate this band. The band’s music is such a big part of our daily lives, career choices and, in turn, so is the band…we care about every member! I pray someone in management can step forward and help us out. Have mercy! Someone please offer a fair Loyal Fan VIP. The band knows who has been around…we want to FEEL these shows…not just “be there.” Many thanks, MUITO OBRIGADA y muchissimas gracias!