In 2010 Tears for Fears returned to Atlanta after being away for nearly 18 years (as a group). Curt says he has been to Atlanta since on business, but it wasn’t a show so fans feel, “that doesn’t count” and welcomed them back with open arms…and some *boobie-flashing* in some cases. Yes, we know who the culprits were. We’re keeping that a secret.

The venue, Chastain, was nearly full with over 3,000+  seats sold plus standing room according to a fan who eavesdropped at the box office security. The set list included many of the band’s new and older music plus several solo pieces. The extremely talented Michael Wainwright opened for them on this tour. Followed by Arrested Development who really warmed up the crowd with incredible hits past and present of their own.

continued with many other well known pieces along with Floating Down a River which at the time had been rarely heard. Fans flocked to Curt Smith’s Facebook wall the morning after and a few reviews were posted about the show. A fb group page remains online in memory of the groups historic return and features info about the show plus short videos of each song they performed. One of the highlights of this show in addition to being so close was meeting Michael Wainwright. 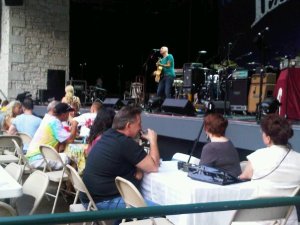 He was everywhere before and after the show. In addition to opening for

the band he also sings the coveted part of Oleta Adams on Badman’s song and Woman in Chains.

*Little known fact that both AD and TFF were played as the opening music for a student news broadcast back in 1993 in Knoxville, Tennessee -Bearden Middle School. The music coordinator (Andye) later took a trip to Atlanta and visited news networks where she would later work as a coordinator. With Tears For Fears coincidently playing in the background the young lady declared the town and her dedication to the band as her future. Little more than 15 years later she suggested  interviews featuring the band The full circle moment was eventually attending her first Tears For Fears concert on the anniversary of her hire date at the network.

Using the Social Media Forum, Twitter she connected with many fans and got Re-tweeted by the band before the show. She later tweeted the whole show for fans who couldn’t make it…rumour is that 10,000 of her tweets are Tears For Fears related. In addition to scoring some pretty cool unconventional souvenirs she bought tons of merchandise for several fans who were working or out of town. One being this T-Shirt. 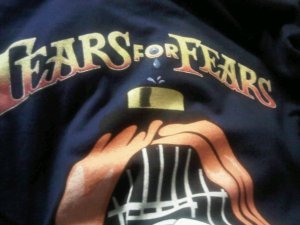 Big Thanks to Todd Skees, another long time fan also in the media industry who made this show extra special for many fans!

Short Video Montage of the Show:

Warning: This was footage from down in the audience, the fans are singing& “screaming.” DO NOT turn the volume up on this video or you will hurt yourself.