Want to give a shout out to all of the fans that travelled to the shows this past weekend. Jen, KPC, Stephen, Sad, Dave, David, the list goes on. In particular, we had fans from Atlanta and New York that made the journey. Stephen documented his travel on Instagram. His primary reason for heading to Ontario was for the band and he ended up making a mini-holiday out of the trip. This post is dedicated to each of these great people who went the extra mile literally.

Off to the land of maple syrup, kindness, and poutine! #canada #tearsforfears #everybodywantstoruletheworld

Well, Tears for Fears in Canada came and went so fast. These videos and photos were shared with us  and brought to our attention aligning  our joint efforts to highlight fans in Canada, many of whom repeated their experience from last year. As Sad mentioned, we always aim to support this band. We addressed concerns about this leg of the tour below. For now, enjoy these shares from both shows. 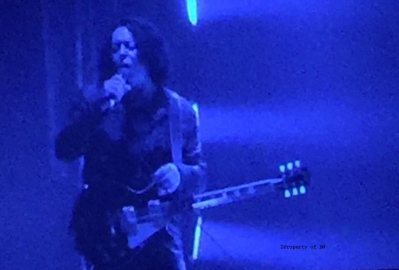 Tears for Fears. Not the best lighting, but the music sounds fantastic! #change #tearsForFears #windsor #ontario

Everybody wants to rule the world. Right??? #tearsforfears #openingsong I'll delete a few in the morning, but for now… #80sgirl

Something happens and I'm head over heels #tearsforfears

Closing out the show with Shout. Fantastic show! #tearsforfears #rama

That moment Roland leans down

Speaking of experiences, we had some complaints this time around. In fact, we’ve had some unhappy travellers in the past few shows and this is due to encounters with some in the audience who may not be so loyal or understand our dedication to the band. We can’t stress enough how important it is for us to have a fan section so we can stand up and sing along without people around us telling us to sit down. Throwing things at us, hitting us and other behaviour toward Tears for Fears fans because we won’t sit down is not acceptable. Snoozing through a show is also rude. If you were hurt during a show, email us. We have a lawyer, security and have no problems pressing charges quietly. Everything is in place to do so. A music holiday shouldn’t be a horror show and those that find these measures extreme should be mindful of karma. We’ve been following this band for years and have never seen or heard of people being assaulted until late 2014.

One of the reasons we have this team and try to keep in touch with everyone is make sure all who are making such an effort to take time out of their busy schedules actually get decent tickets and can sit together. Many travel fans (aka anyone that travels to see the band outside their home state or even 3 hours down the road) could be spending that time making money or being with their families but instead are spending a chunk of change to go see Tears for fears. However, the passion runs deep and people want to pay their respects to the band that made us cry so to speak. Many take their whole families, this is their summer holiday or in the case of the reschedule, an impromptu trip. Many went with their spouses and made the show a date night (i.e. famous musician Ted Yoder). We deserve the right to stand and enjoy a show without being heckled or abused. Due to the horrible behaviour we encountered last year, some sat this tour out and have no intention of travelling again unless we can be close to the band each and every time. No more sitting in balconies or random out of the way places. That’s over.

We don’t expect to meet the band nor do we beg for those things to happen (at least not all of us). The times that it has happened have been miraculous and we’re grateful for the many times we’ve experienced that blessing. Still, there are hundreds of us and they can’t meet us all. This is a concert, not a fan conference. But we do feel that fans who travel deserve some decent respect. That isn’t always happening. The only way to ensure that is with a fan club section at a show or an organised VIP of which isn’t “officially” available. So we work extra hard to literally “mine” tickets, sometimes paying  horrible prices that are 5x as much as market rate just to get everyone together.

We’ve managed to get decent seats at most shows so far …except Canada. We’ve never been able to really get great seats for everyone due to the fact that these are casino shows for the most part. We have no control over who gets on the front row. The casino often reserves those types of premium seats for their casino winners, etc. Or premium seats get “gifted” or rewarded to other people who are rarely hardcore fans. In the case of Friday’s show, two people in those seats fell asleep…and of course Good Man Curt noticed it…and called them out on it. We support his decision to do so.

Those seats could have gone to any one of the people who drove the long distance to see them or maybe another local fan who has waited years for these concerts. Not sure who those people were that slept. Maybe they were just really tired and didn’t feel well? Hope they are okay but in future we trust they’ll have the kindness to leave and hand over their tickets to someone behind them instead of sleeping through a band’s show. It’s just as bad as people who go to the front row and just sit there. Andye saw that happen at Duran Duran/Nile Rogers Chic too…it’s very disrespectful and a slap in the face to tons of fans who, again, went the extra mile.

Of all the good things that did happen, this tweet from Curt was one of them. He’s done it before (solo show Spring 2011). So Heaven be the faith that moves mountains allowing us to support this band in our merry travel fan way. 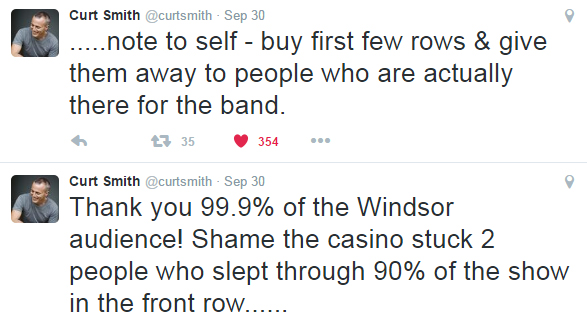 Cheers! Be safe, stand your ground. You paid for it!
-TFF Travel Fans

One thought on “Concert Highlights || Tears for Fears in Canada 2016”