I had the pleasure of working with Adam H, a fellow Tears for Fears Travel Fan, for a short while at an office in Midtown Atlanta. One day he came walking down the hall and settled his arm across my cube with his phone lit up. “Did you see it?!” he asked. “No…,” I said a bit afraid of what I had missed. He handed me his phone and there was the announcement we’d been waiting for…Oleta Adams was finally, officially scheduled at City Winery in Atlanta. I was overwhelmed with emotion. That upcoming weekend I literally went back to the hotel where many of us stayed during Tears for Fears’ May 2019 visit and ordered my tickets(with Adam on the phone)while enjoying the immaculate views of that location. So much good had happened there just a month before as we sat there reading Charlton’s book and catching up with one another as a family of fans. It was SUCH a memorable weekend. Now we’d get to do it again with Oleta Adams?! OMGoodness! She is award winning all on her own but also a beloved alumni of our bespoke band and this was like a gift from the Universe to have this opportunity.

I booked another weekend there, this time arriving on Sunday afternoon and leaving Tuesday morning as she was coming in on the 8th of July. I’d have stayed there and perched from Thursday through Tuesday if I could have. Teresa was driving in, Adam and Lisa and I had seats right next to each other and we were right up against the stage.

About the Venue
City Winery is a very intimate and tight setting as chairs and tables are very close together with little room for aisles. I knew I wouldn’t be getting up too much and would need to rely on the waitress for anything vs. going to the bar by myself. This was a SOLD OUT show so there was not one seat that wasn’t taken. Though living in ATL I hadn’t spent a lot of time at this venue because I wasn’t exactly sure where it was. But now that I know where it is, I want us to have some TFF gatherings here. It’s amazing! We all know Roland loves a great glass of wine and it would be lovely to get the band here for a Platinum Level weekend of fun and maybe invite Oleta Adams to return around the same time. I know we all want it on this side of the fan world. We understand that they do not have a performing relationship as they tour separately but can’t help but long for the day they sing WIC and other amazing hits together again. It’s hard not to want that. So, when Oleta Adams walked out on stage, it was that same rush of emotion that we get when ROCS appear. For better or worse, I immediately started crying. Their music was attached to an era of challenge for me and, much like it has for so many others, accompanied me through those trying times. And here I am on the other side of discomfort, working my way through the world and they are still here with us bringing comfort with their award winning collections. This venue was a perfect setting for absorbing her amazing energy and comforting presence not to mention her immaculate voice.

The Show
Oleta Adams has her own music, her own songs. This was not a Tears for Fears concert and I’m not comparing it to their independent work but you could feel the tunes and hear the familiarity in her piano playing as one would with the band’s. We kept whispering and nudging each other how it was like being with Tears for Fears with Oleta at the lead. She has an amazing band that does great on support. Her husband is on percussion and cajon. She also dances during the sets. She interacts with the audience a lot! I think my bright sparkling Anthony Bourdain pin must have caught her eye because she kept looking in our direction. Maybe it was more than that, an angel in the audience standing over us? We were just so happy and though I cried the whole show, I hope she understood that they were tears of joy. She knew we were coming so had I fainted she probably would have said, “must be one of the TFFers.”

One of the best parts about the show is when she comes closer to the audience and sits near. She and her band go acoustic for a few songs more or less and it turns into this incredible jam session that is energetic and regal. That alone is worth attending. So, imagine you get that and a whole lot more. You know how we love stories and conversations between songs? She provides that as well and they are full, rich accounts and memories that segue into songs. It’s indescribable and if I had the cash, I’d take some holiday time and follow her around as much as we follow Tears for Fears. The energy and vibe she and her band produce is one that is healing, warm and cleansing. I felt renewed after that show, completely renewed.

I won’t list out the whole set list but “Get Here” is on it as is “Circle of One.” It’s very moving. Even typing this has been difficult and has taken a very long time to put into words because it’ll leave you speechless.

After the Show
She changed clothes and then sat behind a nice table and signed every single CD of every person that purchased one. Fans near and far would not stop hugging and kissing on her. I don’t encourage that because she has to travel and if we pass on any unknown colds or anything during a loving smooch then she has to stop her work and rest which affects her wallet and we don’t want that. I didn’t get too close at all. I took pictures only.

Before we left, I thanked her for being so tolerant of our excessive notes, likes, loves and comments on her social media accounts. As promised, I also shared messages from fellow TFFers who wanted to be there but were out of the country with TFF themselves and also some in Brasil. She smiled really big and laughed because it all made sense to her now why we were glued to the stage, our eyes darting back and forth at her every move like loving kittens waiting to be picked up or petted. She stayed longer and took pictures with us and was just truly obliging. I didn’t want the night to end. I didn’t know what to do.
I was on such a happy euphoric cloud nine high that I left my keys in the ignition of my car the next morning. The doors were unlocked and all my things were in it including my computer with all our files. I was just so in a state of disbelief and joy. I couldn’t believe that we met her and that all that happened. Thankfully, my insurance brought a wonderful team out to get my car restarted and I was able to replace the car battery the next day. Angels must have watched over my suitcase, computer and belongings because they were all in place in the middle of the parking lot. I really needed to get myself together emotionally cause my heart and soul had gone on with her on tour. I was just a shell of myself wondering through the day, crying and wishing this was 365 like it used to be. May the Universe grant us the ability to follow TFF and the alumni for a constant state of joy and bliss! We Love You, Oleta!!!!

Part of our Tears for Fears conference wishes were to have the alumni present. We certainly support Manny Elias, Nicky Holland and others who have helped make Tears for Fears great! Oleta Adams is the TFF queen and will be coming to Atlanta on Monday 8 July. If you are not at the shows in Europe, it would be cool if you have time to swing by ATL that long July 4th weekend for a show featuring the one and only. She, of course, will be singing her own music – this isn’t a Tears for Fears show it’s an alumni member. Let’s support her and who knows what the future may be (wink wink). 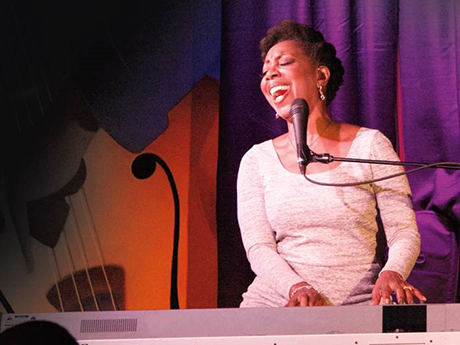 The show takes place in a very trendy part of Atlanta off of the famous Ponce de Leon Avenue. There is a HUGE Whole Foods Market across the street and the venue itself is in the ever loved Ponce City Market. City Winery is a very unique and cool venue. It’s nothing but a shame that Tears for Fears haven’t played a series of nightly shows at this specific location. We can continue to request it. Meanwhile this is certainly an overwhelming joy to have Oleta Adams in the house. And Adam, Lisa, Andye and others are ready for her! Join in a fun #MusicMonday that will be EPIC!

Hotel: Let’s stick with the Hyatt Centric Midtown because it’s not that far (10 minutes and Uber won’t be more than $15-$20 either way)

Foodies – this is the heart of the foodie district so you’ll have lots of wine and goodies throughout a 50 mile radius!

Parking – there is a huge lot all around it. Mondays are slower in Atlanta so traffic won’t be too crazy.

Again, it’s a long weekend, take an extra day if you can and come listen to this legend that Tears for Fears discovered in Kansas City near fellow fan Carolyn. This is too exciting!