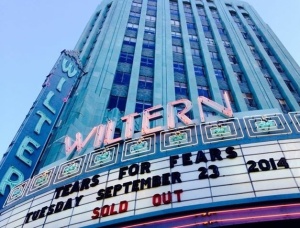 One of the awesome things about travelling to see this band is meeting up with fellow dedicated fans. The group is very diverse with writers, photographers, up & coming artists, award-winning musicians and families, sometimes third and fourth generation…and all from different cultures and walks of life. We all make great efforts to get to the shows with one common goal; Celebrate Tears for Fears.

This year we were happy to find out in advance that our honourary Travel Fan Pal, Jason DeBord, would be in attendance. He mentioned he’d aim to join the crowd for two shows, L.A. and Oakland. Here’s his review of the L.A. Wiltern sold out show that took place last month.

But first, check this out from Sherlock SK – RADIO INTERVIEW WITH CURT SMITH http://www.kost1035.com/onair/mark-wallengren-46198/interview-curt-smith-from-tears-for-12791939/ (A Listening Experience)

Review – Tears for Fears – Los Angeles – Venue – The Wiltern
“Is that the new iPhone 6?” Roland Orzabal, early on in the show, as he and Curt Smith looked out over the sea of cell phones in the air, held by an exuberant sold out crowd at the historic Wiltern in Los Angeles last night. Tears for Fears, best known for their collection of timeless and classic New Wave hits from the 80s, do not tour very often, and when they do, the tours are usually not too many dates and cities. So there was a bit of an “event” feeling in the air, and based on some of their comments later in the show, they both seem to have quite an affinity for the City of Angels. Click here to read more.
Follow @Rocksubculture on Twitter

Please read on to see the photos and videos from other professional writers and media team members and fans. Many thanks to everyone who contributed links, recordings and show photos. We’ve been sharing them for over a week and the excitement from this tour hasn’t left us…it lingers throughout the day and night, well into our dreams. 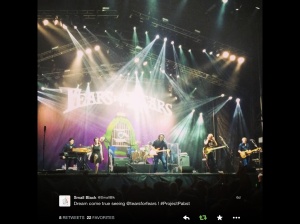 Where you goin’ Roland? Rolaannd?

Tears for Fears Portland’s Project Pabst
First off, big thanks to KLF Barret for sharing photos throughout the evening, tweeting her show experience & filling our macaron dreams. Our travel fan team member Lael was too ill to attend the show but others stepped in and reported back with magnificent pictures and more.

Creep by Radiohead covered by Tears for Fears uploaded by Teresa Cook
(chose this particular upload as the others recorded the technical difficulties that were happening – check those out though, TFF handle everything like pros and are so crowd inclusive)

Sowing the Seeds of Love recorded by Bobby Digital

Ready to Start by AF covered by Tears for Fears
(there are so many great vidoes of this floating around, some featuring some eye-catching close-ups of Mr. Orzabal’s beautiful face. It’s breathtaking…so brace yourself.)

What a nice tweet from the band! Great picture! Lovely wrap up of 2014!

It's been amazing run of shows. Thank you to those of you who came out! It was so good to see you again…. pic.twitter.com/LT65P8Lnxs

5. We’ve already agreed the tour was short notice. But we learned it was not the band’s intention (nor did we assume it was). They aren’t a team of arses so let’s move on from this.

4. It wasn’t East Coast as everyone assumed the next tour would be. But let’s rejoice that the midwest was once again included…and we had a damn good time in Texas and Oklahoma! Big thanks to Becky for helping make that happen.

3. 4 out 5 shows were general admission – Booo! Many fans reported to me that their bodies just can’t handle sitting on the ground outside or standing against a wall for long periods of time anymore. That is very understandable! As Carri would say, “We OVERstand your pain.” For those that mustered through the agony, thank you w/a virtual heating pad for those legs and ankles! We had a great time waiting in line and meeting new people! High Five to Katie and Snap Happy Pam…and to Jamie Wollum Drummer Genius for making it worth everyone’s while.

2. This was expensive! Actually, it was the same price as the last two tours with respect to hotel prices, food, merch, show tickets and airfare combined. The kicker was if you didn’t rent a car from the airport, it was easily $250-$333 each way from Dallas into Thackerville…adding an extra $500-$600.

BUT!!! Enter the Travel Fan Team —> ; We worked together. So, for those who carpooled or offered it, thank you! Huge thanks to Becky for clocking over 1,000 miles to get fans from point A to B and back again in time to catch their flights.

1. Missing Info & People… yeah. What was up with the lack of email newsletters from the offical tears for fears website? The official twitter handle was still only posting throwback thursday photos vs. show announcements. But that seems to be changing, so…let’s not be hard on band management, there are a lot of great folks behind that team. We owe them a lot.

**But can I just add that personally I missed Stand or Fall in the pre-show music series, like, maaaan, we were waitin’ on that track. Cool to have Seal but The Fixx, you know, that used to come on just before TFF on radio hit countdowns and…let me stop. I won’t kick up a stink over it. I should be happy in the pink.

Annnd…a lot of people just couldn’t make it…but you know, it worked in the end for those that could. We were really worried if we could pull this off and by the Grace we did and were able to share the experience with the teams and families.

Shout out to fans who celebrated from home and a big congrats to Travel Fans Mark & SheeShee who got married the weekend of the Thackerville show! They of course played Tears for Fears at their wedding! As it should be done…

5. Beautiful Accommodations – Minus the indoor smoking in the Thackerville casino, it was a cute place. Huge too! You got your money’s worth! We also found some new places to hang out in Los Angeles – even after having spent several summers there we always discover something cool on each visit.

4. Great time of year to tour – We like the September dates, not too hot, not too cold, just right. Breezy, beautiful weather in every location

3. The setlists were FANTASTIC! No, it wasn’t a new album, but the show selections had a whole new feel. Songs were re-arranged, Lorde’s cover of EWTRTW was a great intro with all due respect to Dance of the Knights of which we enjoyed immensely for two tours. Adding Ready to Start was ultra refreshing coupled with Roland’s dancing and the band really getting into it…and of course the Working Hour stole our souls…unforgettable! #LegendaryHistoricMoment!

2. Okay, Roland and Curt were very generous in more ways than one. They were extremely obliging where permissible at their own will. THAT is more than any fan can ask for! Still overwhelmed from that.

1. Curt and Roland look great! The entire team is fit as a fiddle and in tip top shape. They were interactive, full of smiles, great fashion and stage presence, birthday shoutouts…and they did a mini-roll call with shout outs to the Kooks and those that travelled a long way to see them. Most of all…they are celebrating over 30 of music. 30 Years…And they still rule the world like a bunch of smokin’ hot badasses! BOOM! They ARE all that! Peace! :drops mic and walks away:

Thanks for reading 😉
(AA)