Skip to content
*Dedicated to Travel Fans Bob Ramos (Maestro), Silver Kitty, Lady Carolyn and Lax M. ~ thank you for making the journey!
*pardon my mixed English…I don’t use this language much except online and in professional settings.

So… as we head eastward toward Red Bank we get a text from Deb, “Hold that ticket! Don’t give it away just yet.” After checking into the hotel, Deb sends another text stating that she’s turned that car around and is going to be able to make it to the show! Her third one of this leg of the TFF Tour. Haha! Now that’s a travel fan! We cheered as she came upstairs. The gang was all there. Time for more Tears for Fears Travel Fan fun (or pure majestic music madness)!

By 6:30pm we were driving around looking for parking and were fortunate to find a spot outside some really cool shoppes two blocks from the Count Basie Theater. The night prior I remember being rather calm (which is not my norm). Tonight I was back to my usual Tears for Fears pre-show jitters and they were in full force. Again, I couldn’t walk, I was pausing a lot on the side walk and could barely stand up straight. The butterflies were hardcore having it out inside my soul. I managed to crawl to the venue where we were met by a slew of fellow travel fans who were detailing all of the things that had happened to us, they had been following along via social media (Twitter, FB, Periscope).
We wasted no time and went right into hugs and photos. Then we all floated into that majestic venue as Stand or Fall began to play. We were decked out in our concert clothes, dancing around; me in a tiara to represent the fact this band is Rock Royalty and Carolyn in her Roland T-shirt and tattoo. I sat in the center, four rows from the stage and much closer to it. Lax from San Fran was right beside me. I have to tell you, Lax is an uber-dedicated fan who cares not just about other travellers but about the comfort of the band. Just listening to him speak gave me chills as his care and concern for their well-being took precedence over asking for a meet and greet and other things that I’ve come to learn are the first things people ask about during meetups. He’s met them before and will see them again. Lax’ first priority was hoping that TFF were well rested and feeling good for the show. Kudos to you Lax! You are too cool!
Just like the night prior, Carina comes out and does her cool song set. This time she added a different tune that was a bit edgier. I think it was a suggestion by Bill of the TFF crew. Then the band came out and did what they do best, this time to a very eager and excited crowd. When Falling Down began to play, my hands shook a little because I was afraid people would sit down as they had the night before in Morristown…but they didn’t. The majority stayed on their feet, swayed and sang along.
Here’s what was on the list…

Mega Marvelous Moments Admist Amazing Music
Again, the entire show was much more energetic audience-wise than that of Morristown NJ. And of course, the band is ALWAYS animated and fun. They are great showmen and women. They’ve got this! But the energy was powered by a much more diverse group of people…slews of fans from New York. The crowd included notable folks like one of the leaders of Brown Girls Burlesque, an entertainment producer from the D.C. area and financial grinders from Wall Street. All were totally ELECTRIC! The people in the three rows ahead of me/on the front row were jumping around, women on the second row were dancing like crazy (as seen in many videos) and people were genuinely courteous to each other…even those who asked if I would give them my seat. They didn’t get upset with me when I refused…they later understood.

There was a very tiny blooper where Roland seemed to forget a verse of ELAHE. And it was actually quite awesome. Here’s why…that’s one of many songs with complicated lines I’ve memorised to the very end. So… myself and others who knew it kept right on singing …LOUD. I could hear myself over the few seconds of silence. I quickly piped down but it was too late. Some people turned around and looked at me as if they were trying to figure out the rest of the song. Some people were sitting at this point so I was this lone person in the center of this venue (here we go again). I could feel Roland’s spotlight hitting my back making a shadow on the seats in front of me because I was directly in front of him four rows back. “It’s okay!” I yelled and started hand gesturing the rest of the lyrics. Roland hopped right back into the verse like a pro and we all sang along. It was so much fun. I almost wish he’d pause on purpose and let the audience fill in just for kicks…but anyway…

It’ll be a moment only G-d and I will remember. I’m sure the Good Sir has washed it from his memory and rightly so, it wasn’t that big of a deal but darn that was fun for those of us who love that song. I enjoyed acting out the words  as ridiculous as I may have looked in that Alice in Wonderland Mad Hatter coordinate and tiara. That spotlight was so bright it was impossible to avoid being a spectacle standing there animated, wiggling around to the beat but hey…You only live once… YO-EFFIN-LO.

Another outstanding moment was Curt wearing a very special Ben Sherman shirt and walking over to Silver Kitty so she could see he was wearing her gift. I about died…I was so happy. I’ve yet to have seen that on any of the videos, so again, that’s between us and G-d Almighty.

But two things did get on camera thanks to Mr. Ramos and SK, The Good Man came over just after Head Over Heels and gave Travel Fan, Queen of Kooks, Silver K the coolest of hugs! If any other hugs occurred on the planet that night, they didn’t compare to the one she got. It was so sweet and so caring. Boy did that soothe my soul. We as fans love Curt and his family. G-d bless them. Very sweet Smith Family Rockers…a gentle family with big hearts.

In case that’s not clear, we’ll play it for you…
Let me not forget another  moment of joy and glory when The Good Sir let me sing again with Lady Cams on Shout… 😉 that’s like the second time (first time was 2011) and I swear when I die I will have that put on my tombstone, “Sir Roland Orzabal let me sing…twice.”

*Thanks SK for prompting me to come stand with you. Thanks to the people next to you who ushered me right on in. 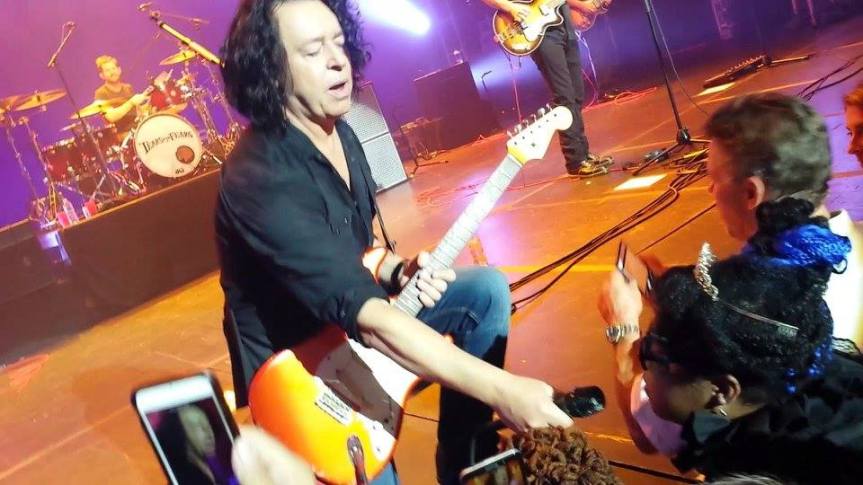 Sowing the Seeds …For Real

So…the show ends, the lights go up and suddenly all these shiny (drenched) happy people turn around and look at their fellow concert goers that they’ve been dancing and singing next to all evening. “I’ve got pictures of you, let me send them to you,” one began. Then others chimed in showing each other their pictures and immediately texting these perfect strangers all of their photos.

One person in particular was Bob Ramos, a music guru with a long history in music education…yeah, he was there too! Isn’t that the coolest?! “I’ve got pictures of you, and you…and you, too!” he said as he pointed to each person near the stage. We exchanged email addresses and chatted for a few minutes (very briefly because security was trying to clear that place out). But then something odd happened…people started hugging…and kissing…and smooching each other goodbye. People that had never even met before…even I was gently kissed by strangers a few times and not a pop kiss on the cheek either, a full on frontal smack on the lips. In our not so tidy states of joy THAT happened…and you know what ::whispering:: I liked it! #TFFUtopia

I remember turning back around to one of the rather skilled darlings (he clearly had a PhD from the University of Pucker-Up and shall remain nameless) to give him a compliment on his kindness. I dropped a loving line and walked away for fear I might be so bold and ask for another. For shame, indeed. That’s perhaps an overshare. But we’re all friends now. It was all in the name of love. Still rarely a dull moment in this crew, eh? Speaking of moments, did I mention Kris slid Roland some chocolate in the middle of the show! LOL! He leaned right over and loved it! #ChocolateTennisRacket for the win! So cute!!

Drummer Genius Jamie Wollam was very generous with  drum sticks this tour. He not only gave out the pair he played with that night but also brand new ones to various people. He threw a drum stick toward Bobby (who already had a pair from the Tulsa Oklahoma show) and Bobby caught it…and gave it to a sweet man who happened to be in a wheelchair in front of him. Made that man’s night! Huge thanks to Jamie for being so accommodating to many of the dears and giving encouraging and kind words throughout their time with the band.

We finally left the concert area, well some of us anyway… Bobby went backstage and had a long chat with Roland about music, song meanings and other stuff. Several Travel Fans hung out near Carina, our man Mr. Ramos got some drum sticks and a set list signed…and as he put it, had his “expectations met like a MOFO.” 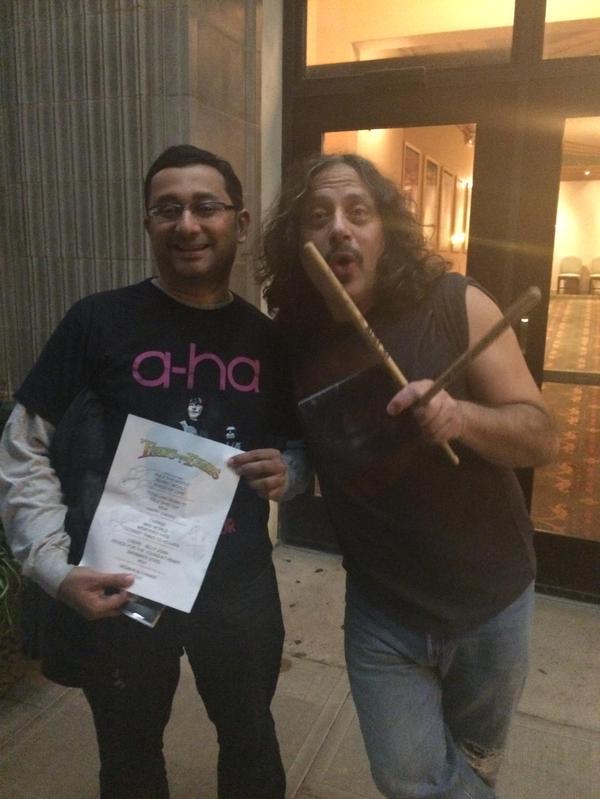 We had entirely too much fun not only with the band but with fellow fans. We played and chatted like kids and teens with new and old fan family as they came out from backstage. Curt had to jet but when I checked my phone I found he had left me a really nice note. I cherish things like that. He didn’t have to say anything at all but he did…he did a lot of things. Gestures are everything. To finish up our outstanding evening we went over to the best, authentic Mexican Restaurant on the planet before heading back to the hotel. It’s called North of the Border and it’s not far from the train. Go eat there! It’s incredible!

!!!IT WAS SUCH AN AWESOME NIGHT!!! Sadly words and these descriptions can’t really sum up the event. It was one of those, “you had to be there” occasions. There are so many people to thank including the Angels of Mercy that got us there. What more can we say? Muchisimas Gracias, Dalu, Salamat, Merci and THANK YOU!

More pictures from the show… Thanks Mr. Ramos! 😉 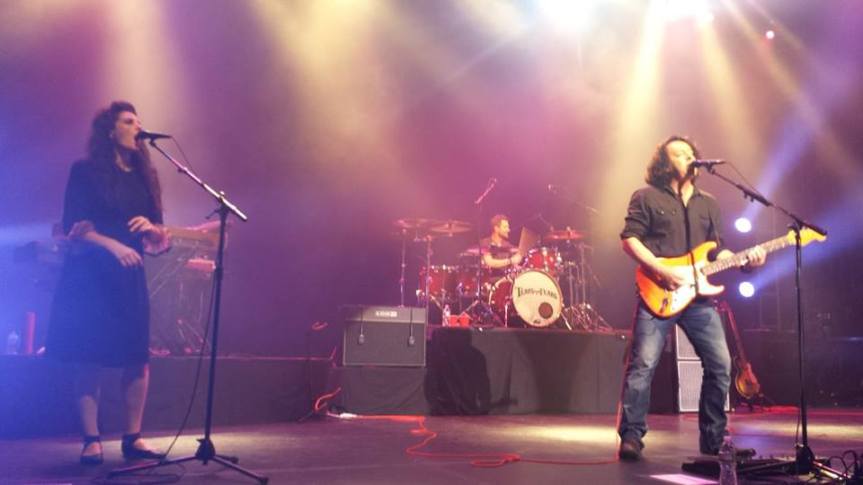 *These photos are the property of Bob (we’re nicknaming “Maestro” …everybody on the travel fan team gets a nickaname). Please respect that he was the photographer. We appreciate his gifts and they should be credited as such.

Everybody Wants to Rule the World

Break It Down Again

Sowing The Seeds of Love

Advice for the Young at Heart