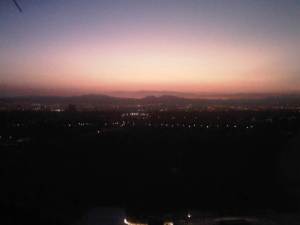 During the Tears for Fears stop in Vegas, several members from the stateside Kooks Team CS were hanging around the pool… 11am-ish. I’d been up for hours…watching the sunrise and reading tweets by Michael Wainwright. So by the afternoon I was light headed and dizzy, wishing I had brought swim gear so I could splish splash around in the water with Carri D. And as we laughed and giggled various fans came over to say hi saying they recognized me by my
glasses

from Facebook and other online Tears for Fears fan communities.

up speakers and running cords. We were busy chatting about the band and what was going to be on the set list. Our conversation was the same with each fan that came up to us as we sat perched between palm trees, looking at the stage and watching how the whole event was put together. Music Superheroes became the term of the afternoon and was used to describe both Roland and Curt so passerbys &road crew wouldn’t think we were talking about them like a bunch of groupies. And from that, the names Batman and Superman were the selected for these Rock Royalists. 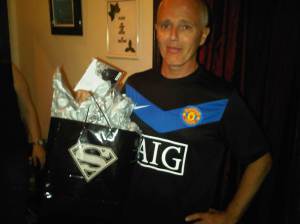 It was perfect because earlier that summer we’d given Curt a Superman bag filled with a special watch from us and then some branded items that my boss said he might like. From that day forward Batman (pronounced with excitement BATmaaayyyn) and Superman (Supaaahmaahhn) replaced Roland and Curt’s names in just about every conversation online and off. It’s been fun. And Manami from the Japan Tears and Kooks team created this cool picture of the  Online Party game theme. It’s been a blast…some childhood fun come to life in a modern way. I even got a Batman lunchbox recently after spotting in the check outline of a dress shop believe it or not. Too much fun! 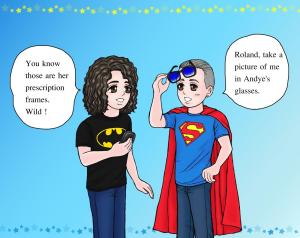